The biggest winner of the Teacher Silent Auction was the Lamer Family.  As you know, the staff of Georgetown Elementary offered up  TIME WITH KIDS as items to bid upon by those who attended the carnival.  However…it is fair to say that there were several other winners as a result of the bidding done by parents.  One such winner is Spencer who’s parents had the top bid for “ABILITY TO CALL AN EXTRA RECESS FOR YOUR GRADE.”

As a fourth grader, Spencer earned the right to select a day and time for his fourth grade classes to have an additional recess.  I met with Mr. Gort (Spencer’s teacher) to determine best options and Spencer was declared the king of recess for Thursday, May 20. 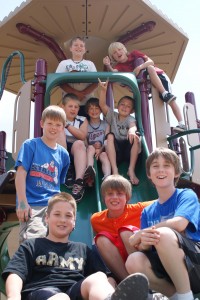