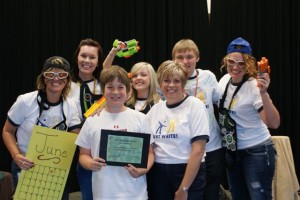 Spencer Alexander’s story, PAINTBALL AT SPRING HILL CAMP was selected as worthy of a performance by the Art, Music and PE teaching team for our all school JUST WRITE CELEBRATION.

You can view the teacher performance below.  Congratulations,  Spencer, on being a JUST RIGHT JUST WRITE author!

“Hurry get on the train Spencer it’s about to leave!” Tom screamed.

It was around nine o’clock in the morning at Spring Hill Camp, the best summer camp ever. The sun was shining through the trees and there was  a slight breeze.  At that moment I said to my self, “It’s a perfect day for paintball.”

Next, I ran to the new paintball shack and reserved all of my supplies,  which consists of a paintball gun, mask, Co2, and ammunition.  After that my team and I hit the field.  We took the far side of the field, and the other team took the other side.  At last, everyone was waiting for the whistle to blow.

“Go, go, go!” one of the older kids yelled at me, “Spencer get in that bunker, and make sure the other team doesn’t take it!”

So I did, but I should not have listened to that older kid because now I was down on my back and couldn’t move or I would get shot.

Finally, about five minutes into the game one of our bunker busters shot their machine gunner. So when I had the chance, I jumped up out of the hole and sprinted around to find a sniping spot. I settled around a big fat thick soggy smelly log.

After finding a spot, I immediately started to fire my gun. I actually hit about three guys, even though that does not seem like a lot. There was a total of fifteen team members on their team. But when I ducked down to reload my gun I heard, “Surround him.” I looked up and found four people where looking me straight into my eyes. I realized at about that time that I was ambushed.

But within seconds, four paintballs were about to hit me! It felt like one hundred hornets had stung me in my chest. When I started to crawl out of the field I realized it does not matter, I got out because I had a whole week left at summer camp!

Wow, that week must have gone by quickly because before I new it, my week at camp was over. I will always remember the time I had at Spring Hill summer camp, forever.  I have already reserved my spot for next summer, and I will be bringing a few friends with me.  I cannot wait!