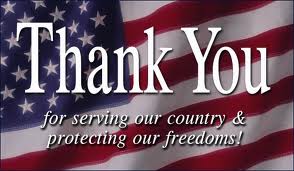 Did you know that we have nearly 23.2 million veterans in the United States?  Chances are each one of us know a veteran or family member of a veteran.