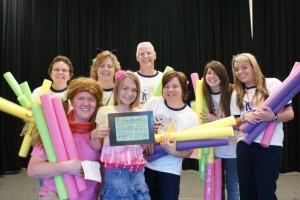 Brooklyn’s story, It’s Just A Dream, was selected as worthy of a performance by the 4th grade team.

You can view the teacher performance below.  Congratulations Brooklyn on being a JUST RIGHT JUST WRITE author!

In the middle of the night, Emily heard a noise, so she woke up with her cat Alissa laying on her face! “Off Alissa, off!’’ Emily ordered. When Alissa got off Emily went on the balcony, and there was a shooting star! When she was about to make her wish her stomach growled. “I wish it could rain gummy worms!’’ she whispered to her self then she went back to bed.

The next day, Emily was in Math class she and her class mates heard a loud noise:
BOOM!!!!!

Everyone looked out the window saw a GIANT colorful gummy worm! Every single kid in Emily’s class ran outside and began eating the over sized gummy worm. After an hour or two, kids started getting chubbier and chubbier and the worms were getting bigger and bigger! Soon gummy worms were falling down like there was no tomorrow! Then, Emily started to hear a voice. ‘‘It’s all your fault!’‘ yelled a man.

‘‘No it’s not!’‘ shouted an angry woman. Then Emily’s seat partner remembered that when the first gummy worm fell Emily had said, ‘‘My wish came true!’’

Everyone in town turned to a angry mob and started chasing Emily all around until Emily saw a shadow getting bigger and bigger above her head! BOOM!

Just then, her dad walked into her bedroom. Emily looked at him and said, “Good morning, dad. I just had the weirdest dream.’’